Skip to content
December 05, 2020
The spring/summer 2014 fashion trend of Kaduni men'swear is about to be released soon. In this issue of the theme "Looking for the sailing of Kadini," the industry insiders and friends of the broad masses of joining agents are welcome to visit us. 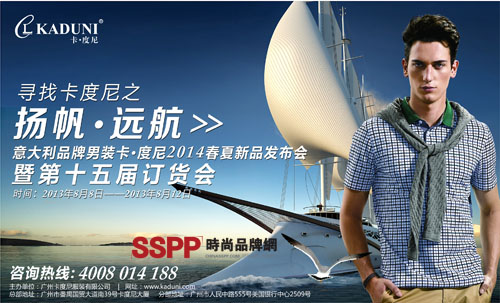 Italy - the birthplace of the ancient Roman Empire and the European Renaissance, there are only one reason why many people were impressed by Italy. Here is the perfect fashion from ancient times to the present.
In the 1960s, J.KADUNI was born in Florence. He graduated from the Malany School of Clothing in 1984, and later joined the film industry as a costume designer. Every day, the director discusses the character and background of each character carefully. It chooses clothes that are appropriate for the character's intrinsic qualities.
In 1994, KADUNI established its own clothing brand, KADUNI, with the support of many fashion designers. In 1998, at the Milan International Apparel Fair, J.KADUNI won numerous praises and honours and really created a brand era that belongs to J.KADUNI. Product style covers: classic business, taste casual, refined holiday three series.
At the beginning of the 21st century, Mr. Wang Dunle, who lived in Europe, happened to meet JKADUNI on the banks of the Seine. Two insightful people in different countries saw each other, met each other, met each other, met each other, and then JKADUNI took the KADUNI brand. Independent research and development, production, development, sales, and promotion in the Greater China Region were solely authorized by Mr. Wang Dunle.
In September 2005, Card Duni officially entered China, adhering to the "pragmatic progress" business philosophy, has won the praise and support of consumers.
We are convinced that if we are the future, we will actively pursue international development in the pursuit of new development and share the future with everyone.
Style positioning: mainly developed around three series, with classic business, tasteful leisure and exquisite holiday as the three thematic design concepts, focusing on fabric and material selection, wearing comfortable, good touch.